Home Team HTHS hosted RHS on the evening of Friday May 6th.

The opening kick off was fielded by HTHS fly half turned scrum half, Hamer. This was telling of how many touches and probing runs he would have on the day. Shortly after RHS were awarded a penalty and kicked into the corner for a 10 metre line out. Trimble came away with the ball and moved it wide in an effort to run it out of their end zone.

After another line out RHS were awarded another penalty from 25 years out and Carrier came up short on the kick. Hamer touched down the missed kick and the ensuing 22 relieved pressure from HTHS. HTHS 8 man Fall tackled the receiving Riverview player into touch.

RHS Lock Seely cleanly stole the line out and RHS were still attacking in the HTHS zone.

A turn over in the tackle and quick counter attack had HTHS being awarded a penalty in the 16th minute 20 yards from the post. Hasgul, coming off of a 5/5 kicking performance in his previous game made no mistake. Trimble took a 3-0 lead.

On the following kick off, RHS quickly stole the ball back from HTHS. RHS 8 man Power was looking to run wide left when he was caught by HTHS prop Shannon. In the spin of the tackle, Power made contact with his own scrum half Jaillet.  As a precaution Power left the game and didn’t return.

, he left the game for precautionary reasons after contact with a team-mate during a tackle.

The loss of Power would be costly as the game proceeded. At this point, he had been most apt at gaining the advantage line for either team.

RHS continued to apply pressure and play continued in the HTHS end. Sustained pressure resulted in HTHS being penalized repeated and the first yellow card of the day made its appearance. 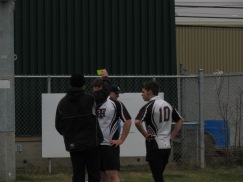 RHS kicked in to the corner, but the following lineout from 25 metres out was not thrown 5.  HTHS were able to cler their lines and earned a quick turn over following the kick. After this sequence. RHS scrum half Jaillet left with a heavy nose bled and would not return.

The remainder of the first half would be a back and forth affair with boths teams playing near mid field.

Great tackling by Shannon continued and he turned back strong running from RHS Norman. Meanwhile Fall was able to get breaks for HTHS while RHS 12,Hawkes, was impressive throughout. 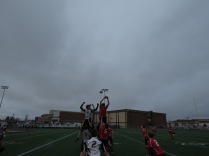 Trimble did get close to scoring the first try of the match with the balls in the hands of power house prop Shannon only 3 yards out when he was met by U16 Norman and the rest of the RHS pack.  The following phases seemed to promise five points for HTHS, but RHS were able to clear their lines.

Without either their starting 8 or 9 it would seem difficult for RHS to generate offence, but as the first half closed out, it was RHS threatening to score. RHS were awarded a penalty 21 yards yards out and directly in front of the post. RHS had strung together a couple of phases to get this far and looked like they would take a  quick tap penalty. Being down only 3 points and with no time remaining in the half, a kick was the most prudent option. Unfortunately, the kick by Doucet fell short and the half time whistle sounded.

The second half started disastrously for RHS. A deep kick off was fielded deep in the RHS end. The rookie winger did well the gather the ball on his own 5 yard line while retreating. Under the advice of team-mates verbalizing “touch it down”, he did so. This, of course, resulted in a 5 metre scrum awarded to HTHS.

The outcome was predictable. A good effort by the short side flanker for RHS, was not well enough supported to keep Fall out of the end zone. HTHS had the first try of the game.

Hasgul would miss the simple convert, but would play a major role in the remainder of the match.

The majority of the match was very competitive with the RHS tandem of Bessey and Hawkes at 10 and 12 challenging the well defending back line of the Trojans. HTHS played much more for field position with the help of many well placed clearing kicks from their fullback. 3 more cards would be handed out in the second half, all to HTHS. The discipline in the tackle and at the breakdown left something to be desired.

RHS were also guilty of penalties, and unfortunately 3 of those penalties were within range of the posts for Hasgul, who kicked another 3 penalties in the second half, bringing his total on the day to 12 points and the final to 17-0 for the home team. 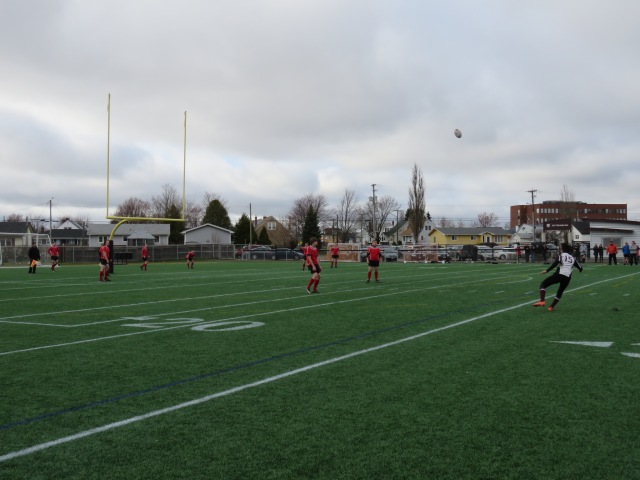 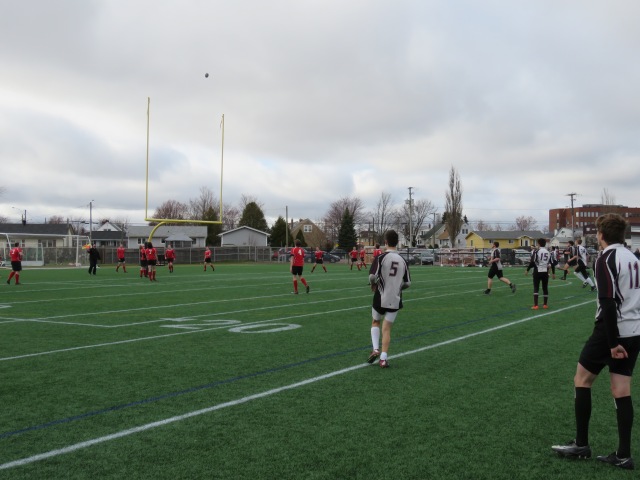 Not enough can be said about the Captains in this one. Hawkes for RHS and Hamer for HTHS ensured this game didn’t get chippy even in the face of multiple tackle related penalties and yellow cards. The tackle infringements didn’t seem malicious, but certainly were outside of what is required to maintain safe play.  The free flowing of yellow cards via experienced referee Arsenault helped the Captains ensure game control was maintained.