The girls have been practicing steadily for over a month and their learning curve is steep.

They have athletes from other sports playing with them: hockey, volleyball, swimming, soccer, basketball, and cheer are well represented.

One of the things they are most proud of as coaches is the number of non-sports playing girls who have joined the team. They told them if they keep coming to practice they will turn them into rugby players – this is a sport that you can play and be involved in over a lifetime.

At the end of the first half the score was 10 – 0 for the Tommies. The TRHS “Red Squad” are the starting side. Holding a more experienced team to only two tries (5 points each) over 35 minutes (high school half duration) was a great beginning for the team. Both tries were scored by an experienced “8 man” (back row in the scrum) for the Tommies.

The final score was 44 – 0 for James M. Hill. The Blue Squad took over at the half and is made up of younger, less experienced players. Great elements of rugby skill were being demonstrated by individuals on the Blue side. As they gel as a team, their success will increase greatly. There are some great tacklers on this side and their scrum dominated the Tommies by the end of the game. There are two or three players that will probably be bumped up to the Red squad by next week. 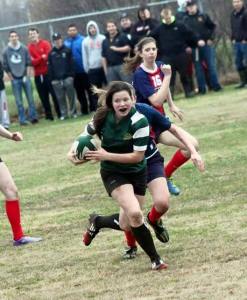 In a post game huddle, Savannah Greenlaw (playing #10 a the “fly half”) was selected Woman of the match by the TRHS coaching team. The coaches could not have been more proud to be leading this team in their historic first season. Lorissa Johnson (teacher/coach), Jonathan W. Allen (coach), Kelly Foran (assistant coach), Amanda Rundle (assistant coach)

Please join them Thursday, May 15, 2015 at 6pm Tantramar High, Jardine Field for their first exhibition and home opener against the Harrison Trimble High Trojans.