The Saint John Irish come into Moncton this evening with a 1-3 record for the season. They are still in a position to rocket into 2nd place in the division should they come away with a bonus point victory today.  With only 2 weeks remaining on the schedule and 2 games total remaining for each team, this match could be the decider on who hosts the semi final.  The road for the Irish is steep as they have there last regular season game versus the undefeated Loyalist  to end the season. As it stands, the Loyalist will host the semi versus the 4th seed. 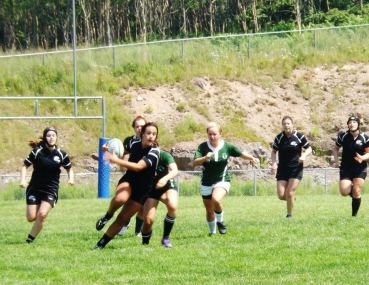 Mathematically the Black Tide could gain enough points to supplant the Loyalist in first place before the end of the regular season, but they would need the loyalist to drop the final two games.  An unlikely prospect from an undefeated side.

The Black Tide Women’s side have been improving and building as the season has worn on.  They have taken on an additional challenge of participating in a new Maritime Elite division which has allowed them to play against two Nova Scotia sides(Tars and HRFC). The added experience was just what is needed for this young side.

There are a few things you should now about the Black Tide Women. First is that they are the 6 time provincial champ, Winning every provincial championship from 2009 to present. Secondly, they have a new coaching team this year. Yves Pellerin and Kim Sinclair(Player/coach) are looking to build up Black Tide club rugby while maintaining a high level of on the field performance. Thirdly, and most surprising, the average age of this team is 19 years 7 months and 24 days of today.

Throughout the run of success, Black Tide women have seen a changing of the guard and remained on top.  It would be tough to imagine that they have ever had a younger team than this.  When the championship streak started the vast majority of this team was in Middle school.

With the way this team has been gelling and improving, confidence is elevating as they appraoch the playoffs and it should be exiting to see how todays game plays out.

Kick Off is at 7pm, ODC School Fields.