Heavy rain before the start of the match ensured wet field conditions for kick off.  However the weather on the day varied from minute to minute. 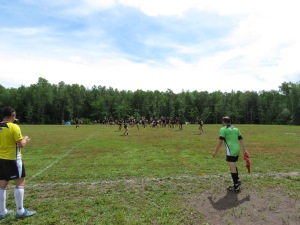 In the first half only  one try came for either team as Holly Jones finished under the post and Donelle converted for the Black Tide. The same phase of play that resulted in the try also saw starting fly half Robertson get injured while diving on a loose ball. Check both angles of the first try of the game:  and

The injury to the Fly Half created a situation in which Donelle switched from playing in the 2nd Row to playing Inside Center. Donelle kicked well on the day and converted 3/5 tries. The toughest on the day that found the inside of the right post can been seen here.

The second half had Moncton scoring early and while threatening to put the game away, the Irish unleashed an amazing score.

From there the supportive home crowd got quiet as it seemed despite all the pressure, momentum might be with the visitors.

Both teams did well in the set piece, maintaining their own possession with a  slight edge going to Moncton in the scrum. Great throwing and loose play from Lisa Cormier ensured Moncton were on the front foot for most of the match. 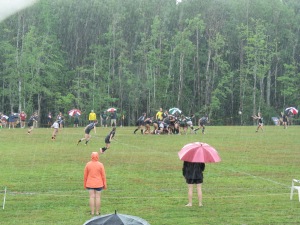 The Moncton back row ensured that the Irish didn’t threaten with ball in hand often and Rundle worked hard to ensure limited touches for the ever so dangerous Irish wingers.

The combination of K Gauvin and H Jones created line break after line break resulting in the majority of the tries. To go along with a couple of assists, Gauvin also scored her own try and put B Richard over late in the 2nd half following a great run by the Black Tide winger Rossignol.

Final Score on the day was 31-5. Jones had 3 tries, Gauvin and Richard with one a piece. Donelle added 6 point on 3 conversions.

Starting Prop A Jones(MHS) who made 3 of the biggest hits of the game, Lock Montiel (MM) who ran great from the base of rucks and Kicker/centre Donelle (ODC) all return to High School in the fall for their senior year.  This may have been one of the youngest teams Black Tide have had, although the veteran presence of Hughes, Cormier, Sinclair, Robertson and Richard ensured that the side showed drastic improvement as the season matured. Of the 3 big hits by A Jones, this was the softest: 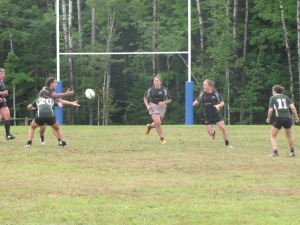 Stand out players left off the score sheet include recent ODC grad Ramade at scrum half and Turcotte at flank. Ramade kept Moncton ball moving quickly while Turcotte prevented the Irish from doing the same. Both are also listed for the Canada U20 Women’s side.

Much credit goes out to the Saint John Irish on reaching their first final berth by overwhelming the unbeaten Loyalist last week. The Irish solid play in the set piece and expansive play in the loose is fun to watch and a great display of the ever increasing skill level of rugby in our province.

This is the first NBRU Senior Championship win as a Head Coach for Yves Pellerin.

For those that made it to the bottom, here is a bonus clip of a great Black Tide set piece that is neutralized by the Irish 8 Man