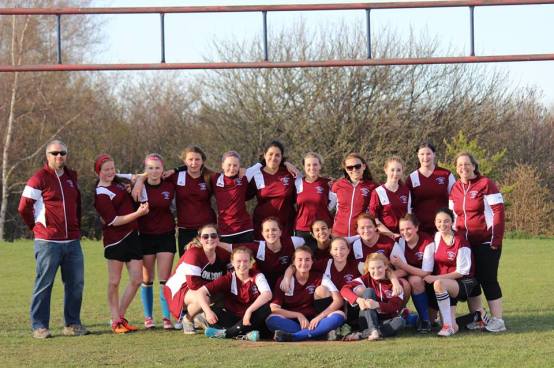 The women Titans travelled to JMA Armstrong in Salisbury last Tuesday, May 19 for their first of two games versus the Cougars. Michael Casswell of the Moncton Black Tide coaches JMA (as do many of the club members at high schools in the Moncton area and beyond). They have a young, inexperienced team that is building towards success as the team matures and gets more matches under their belts.

The Cougars are a closer match for the Titans’ Blue squad. The Blue are a development side of half of the TRHS team. The first half was a closer match. After half-time, the Red squad stepped on the field and it was a one sided game from then on.

From TRHS coach Jonathan W. Allen “A comment about high school rugby and standings. The plus/minus (points scored for and against) for each team is taken into account in determining playoff entries and standings. This forces coaches to run up the score when another team has done the same against a weaker team. I don’t think this serves the ideal of coaching for character and sportsmanlike behaviour to have to humiliate another team – especially at this level of the competition. I would like to see the NBIAA and all of the Athletic Directors revisit this and make by-laws to limit this ugly part of the game”

On Friday we will be posting a recommendation for how the NBIAA could alter how points are awarded to each team for wins, losses, ties etc.  The goal being to remove the emphasize on having a high +/-.  The hope is to allow participation of more athletes and more competitive games. Your input is welcome.