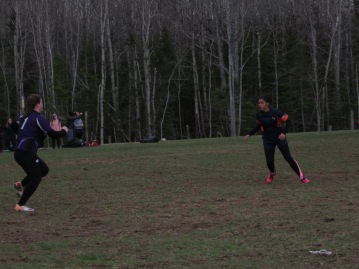 A high tempo game from the kick off looked to favour ODC. Some great line breaks  by the MHS front row swung the momentum quickly.

Moncton High was able to win the first few scrums against the head and one led to the opening try by LeBlance after a smart 8 man pick running left away from the put in due to the steal. The 8 off loaded to the 9 for a quick score off a long run. 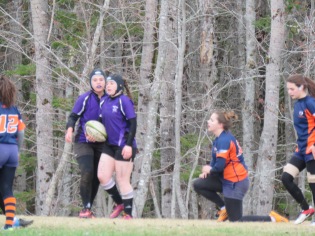 LeBlance would miss the opening conversion but would hit the remainder for the day, finishing with a very impressive 4/5 and tallied up 13 points.

MHS looked to threaten quickly again after the kick off but a turnover at the breakdown resulted in DC fly Half Donnelle breaking loose for a run. The ODC 10 and 12 had many good runs, but the MHS defence refused to break throughout the day. 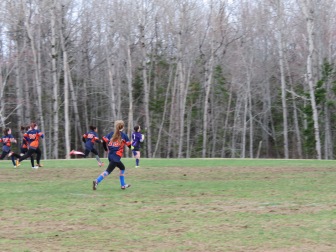 MHS were relentless at the breakdown and seemed to either counter ruck or cleanly steal the ball at every other break down. As a result there was a lot of forward moving ball for the visitors and it led to the 2nd try of the match off another long run. This Breau had a lot of field to cover for the finish and despite being tracked down from behind by the speedy Tallefer, was able to finish under the posts.

ODC Scrum Half Kenny was swift and sneaking and got loss for many darting runs, but wasn’t able to get a cleat run for the line at any time. 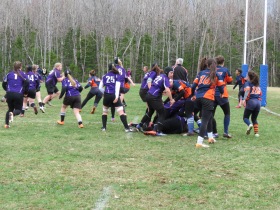 The bright spots of play by ODC began to be overshadowed by the MHS level of play. MHS 8 Man Walker had a sure try but touched the ball down short of the line. This was followed quickly by LeBlance touching one down in the corner, only to have stepped out of bounds, ever so slightly, a few yards short of the line.

The pressure continued as MHS stole the ensuing line-out. MHS Fly Half Heaton facilitated quick ball to tight head prop A.Jones who would had a head of steam and would score on the 8 yard run.

MHS were running down hill at this point and the outcome was determined. Stand out players for MHS Dooley and LaPierre were great on both sides of the ball and at the breakdowns. LaPierre would receive a number of big hits, with one being delivered by Labillois on the touchline after a long run. The crunching finish of the tackle was substantial and it seemed LaPierre might have landed awkwardly, but continued to play very well. 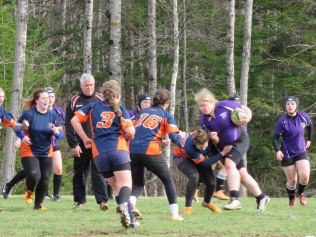 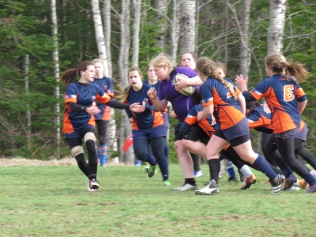 Also scoring in the first half for MHS was Pharuns. Half Time score was 26-0.

The second half was much more competitive for the home team, although it was a struggle for either team to string together multiple phases as the defence at the breakdown was effective in creating turnovers.

A.Jones would pick up a second try on the day and the only MHS score of the second half off of a penalty 5 metres out from the ODC line. ODC would respond late in the half off of a try by 8 Sinzinkayo.

Check back later for more results from yesterdays girls games.